Chapter 5 - There Are No Bad Dogs

Considering how nobody came out, it was inevitable for the rumors of Tantalus to snowball.

Claims that the State was performing human experimentation in order to create a super soldier.

Or that mythological demons roamed the facility.

Or that everyone sent there was secretly executed.

In my case, I was able to see Tantalus with my own eyes. Tantalus certainly lived up to its name.

The abyss. A bottomless hole cursed by the earth itself. An inescapable chasm. Inside, there truly resided mythical, historical, and extraordinary beings like the Dog King, the Progenitor of Vampires, and the Regressor.

The golem had claimed that a prison break had occurred, but I questioned that too. Just what did they do to escape this inescapable prison?

Of course, there was evidence of an outbreak. Most of the walls were shattered, and bars everywhere were bent like candy canes. It was clear that a massive riot had occurred.

Not a single drop of blood could be found.

But I knew the answer to that.

The Progenitor of Vampires, Tyrkanzyaka.

The oldest vampire that slept in Tantalus’s covers had the power to control blood. Any sanguine residue would have been collected by her. It was likely done almost unconsciously, just as an apple was naturally drawn towards the ground.

Without the blood, all that was left in the prison was the rubble.

Thinking that far, I murmured to myself.

“...Could the beings who remained be the scariest of them all?”

It was an ironic yet uncomforting thought.

‘If this were a normal prison, I would have scoffed at those who didn’t have the courage to escape… but I can clearly see that only monsters remained.’

Tyrkanzyaka was known throughout history as the one who could match the great power of the sanctum itself, and the Dog King was among the strongest of the Beast Kings.

‘It’s a relief that neither being particularly has a distaste towards humans. Or else, I would have lost my life the moment I stepped foot into Tantalus. Although, I don’t know how much I’ll be able to last…’

“Either way, there's only one thing to do.”

‘They don’t hate humans and didn’t kill me, so the answer is clear. I need to get on their good side so that if something happens in the future… they’ll take my side.’

After deciding on my goal, I began to move

‘The three prisoners left in Tantalus are the Dog King Azzy, the Progenitor of Vampires Tyrkanzyaka, and the Regressor Shei. Who among the three is the safest and easiest to get close to?’

The answer was obvious. It was undoubtedly Azzy.

Even before history was recorded, dogs and humans had been friends.

Dogs were loyal to humans from birth, and the representative of that species was loyal to all living humans. That was how the State was able to imprison a Beast King within Tantalus. Azzy was the kind of dog who would wait in a cage forever if she was ordered by a human.

If it were a different Beast King, like the Wolf King or Lion King, they would tear through the metal bars instantly. It was not a matter of strength, but a matter of how domesticated they were.

As to why Azzy was imprisoned by the State…

I don’t know, but I can guess.

The Dog King was loyal to all humans.

That included not only the State, but its enemies as well. The State worried that if the resistance or neighboring forces got their hands on her, she might turn against them. So they put her in Tantalus, where they could take her out whenever they needed her.

I couldn’t stop laughing at their idiocy. Keeping your weapon stored in fear of your opponent using it?

‘I’ll show them. Weapons that anyone can use aren’t meant to be hidden.’

I picked up a lamp and opened the doors to the storage room. Thick layers of dust flew off the boxes like fallen snow. Shoving away a couple skulls that were in the way, I grabbed a few sticks, a steel net, and firewood.

Upon closer inspection, the steel net was tattered at its ends, as it had been used to try to capture a large animal and failed. It had sharp hooks sticking out of the other side, and they were caked with dried flesh and bundles of fur.

…Let’s not pry any further.

The wooden poles had sharp hooks attached to the ends.

Just what were they using all this for?

Whatever it used to be, I brought all the equipment out to the field.

Wiping off the animal remains with an oilcloth, I balanced it on top of the firewood like a grill. After finishing the preparations, I placed the lamp next to the wood and flicked my finger towards the pile.

The State’s magic—designed solely for purpose—brought forth a flame. Sparks flew from my finger, and the mana-surged lamp began burning brightly.

I began opening a can as I watched the fire spread to the wood. Taking off the lid, I saw a dry black lump inside. After dipping it into water, it began rehydrating at an extraordinary rate, growing into a piece of meat ten times its original size.

One of the seven great inventions of the Military State: the Military-Grade Compressed Can. It completely removed all moisture from the food, increasing the shelf life by twenty percent. It was processed using magic, and they claimed that it tasted and smelled just as good as real, fresh meat.

At least, they claimed so.

Of course, like all advertisements, it lacked some flavor and texture compared to real meat, but it was more than enough to feed a dog. I placed the rehydrated piece of meat on the grill.

Meat as thick as this took ages to cook, but I didn’t care, since I wouldn’t be the one eating it. I also doubted that the person who was about to eat it would care either. What was important was the smell it emitted as it cooked.

Leaving the meat on the grill, I rattled a bell I had brought back from the storage room.

After a round of ringing the bell, I put it aside and continued to cook the meat. It lost its redness to the burning flame as it began browning. Its juices dripped onto the firewood and turned into smoke, wafting far away. The smell of cooking meat spread throughout the facility.

It was almost time. I shook the bell once again, then I heard it.

Each word echoed from drastically different locations. Azzy’s speed was comparable to the speed of sound. Guessing the time it would take her to arrive, I tensed up my arm and lightly tugged on the net.

The fire exploded a moment later. Ash and smoke flew everywhere, cinders fell to the ground, and the remaining firewood roared with their newfound access to oxygen. Azzy, who had jumped onto the wood in search of the meat, flailed around in the fire.

Without saying anything, I picked up a cloth and swung it at her. After beating off all the cinders, Azzy groaned as she picked herself up. Tears glistened in her eyes, and her fur was singed. Yet, as soon as she saw the meat in my hand, her eyes sparkled.

I put out my palm and shouted.

Azzy looked at my hand as she lowered her body. Her tail wagged frantically, and her eyes were restless. She wanted to run towards the meat with all her might, but I pushed my palm forward whenever she got too restless. Azzy whimpered as she stared at me, unable to move. 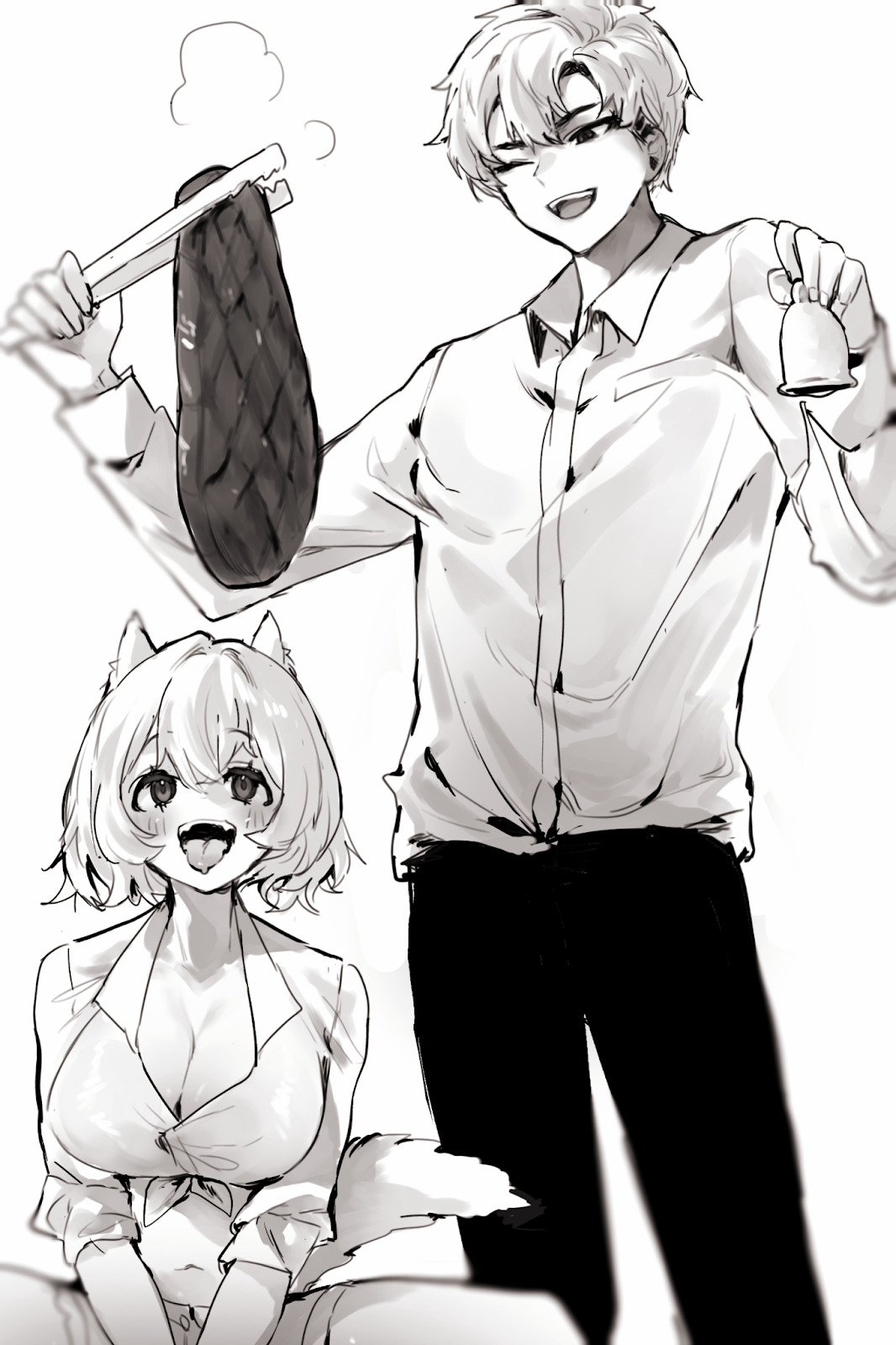 Instead of answering, I took out the bell and slowly shook it left and right. Intrigued by the new object, Azzy completely forgot about the meat and looked at my hand. I slowly waved it until the point where she would lose interest and shook it hard whenever she started to turn back.

Once she had perfect perception of the sound of the bell, I chopped a bit of the half-cooked meat and tossed it. Azzy caught it with her mouth despite the surprise. Even while she was chewing the meat, her gaze didn’t leave the bell.

Using the simulation training method, Azzy had completely understood the meaning of the bell. Now, it was time for a reward.

“Good job! Well done! I expected as much of you!”

Azzy’s eyes opened wide at the sudden barrage of compliments. Despite her confusion, I continued to praise her.

“You’re the ultimate dog! You can identify the bell! And you listen when you’re told to stay! You’re so amazing!”

I continued my compliments. Most people would have gotten suspicious by now, but Azzy was open enough to others that she responded to every compliment. She soon finished swallowing the meat and started shaking her head as she pranced around.

“Right, Azzy! Should we play ball?”

At this moment, the Dog King looked like the happiest dog in the world.

I was grinning with malicious intent inside as I continued to clap my hands for her.

‘Witness this, State. Tools that anyone can use aren’t meant to be hidden. You just need to use it better than anyone else.’

I put the bell back into my pocket. It wasn’t quite enough yet. A single piece of canned meat wouldn’t truly reach her. However, after a day, a week, a month—if I kept showing her the sound of the bell and connected it to happy thoughts, the bell would become the remote that controlled the Dog King.

‘Hehehe, just you wait. You guys think you’ve trapped me, but you’ve also given me time. Time to train the Dog King!’

Azzy didn’t seem to notice the ulterior motive in my laugh and barked along as she circled around my feet. She seemed to be itching for the game of fetch that would eventually happen.

‘Alright. I’ll play fetch as much as you want. If a sore shoulder is what it takes to get closer to the Dog King, I’ll do it!’

As I was about to move to a more open part of the garden, I heard another thought.

「I was wondering where he was, but he was with Azzy? I can’t tell what this man wants to do.」

The regressor had been closely following me. As I was about to turn my head to say hello—

「That’s fine. I’ll camouflage myself and sneak up to him. If he tries to corrupt Azzy, I’ll slice him right away.」

I turned back, but there was nobody to be seen. I couldn’t sense any sign of a person.

Nevertheless, her thoughts persisted clearly. About three meters to my right, I could hear the thoughts of the crossdresser following me with her arms crossed.

Acting like I didn’t notice, I turned back to face the front. ‘Oh, so you’re supposed to be camouflaged… I guess I’ll try my best not to notice…’

Join our Discord for updates on releases! https://dsc.gg/reapercomics